Last Wednesday we welcomed the Mayor of Tunbridge Wells to present certificates at our Bennett Duke of Edinburgh’s Award celebration evening. It was a splendid event, supported by both parents and indeed the fantastic volunteers who help our students achieve the awards and on whom our programme absolutely relies. As I said at the event, our volunteers are amazing models of the selfless giving which is one of the pillars of the Duke of Edinburgh’s Award scheme.

As I write this morning, no less than fifteen Bennett students are at the Palace to be presented with their Gold Awards. We are very proud of them.

Although the award bears the name of the Duke of Edinburgh, its history owes its origins to the German Jewish educator Kurt Hahn. The award was modelled on the so-called Moray badge which Hahn had used as an incentive at Gordonstoun school. Hahn was imprisoned for speaking out against the brutality of the Nazis in 1933,  but he was released following an appeal by Ramsay Macdonald. He subsequently moved to this country, going on to found the famous Scottish boarding school Gordonstoun.

Hahn’s then very distinctive educational philosophy was to believe that all young people have an innate decency and moral sense which can be fostered by creating a context which challenges them to accept responsibility and to show their compassion and concern for one another.

Like many people from the past whom we hold up as models or standard bearers of virtue, Hahn himself was actually all too humanly flawed. One fellow educator who visited Hahn at Gordonstoun commented: “He revealed himself as having a fierce temper, a strong hand with the cane, and a temperament which hated being crossed. Especially damaging to my very English view, was his dislike of being defeated at any game. Hahn was an avid tennis player. But was it an easily forgivable weakness that his opponents had to be chosen for being his inferiors or else, if their form was unknown, instructed not to let themselves win?”

This said, Hahn’s legacy in influencing the Duke of Edinburgh to commission John Hunt, the leader of the first successful ascent of Everest to set up and run his award scheme has been a genuinely remarkable one. The award is now run as a programme in no less than 144 different countries. Its spread and longevity as a programme speaks to its enduring significance and power in developing young people for adult life ready to make their unique contribution to the world.

Hahn’s belief in the potential of all young people for good resonates strongly for us as a school. Whilst we tend to focus when we talk about the Award scheme on the expeditions and the attendant mud and tramping through rain-soaked bogs, it is actually the way in which the programme fosters a sense of interdependence which we ought to prize most highly. Of course that is achieved on the expeditions where young people learn to rely on one another, but it also worked out powerfully through the volunteering and service which Duke of Edinburgh’s Award demands.

In an age where national data tell us that young people are becoming less likely to socialise, to get out of their homes and to take risks, the Duke of Edinburgh’s Award programme provides a powerful counter-cultural antidote, which we definitely ought to celebrate. That’s why this school prioritises the Award so strongly. We look forward to even more Bennett students going to the Palace to collect their Gold Awards. The prospects for this look good, with over 200 of our current year 10 (the largest cohort ever) having just completed their practice expeditions. 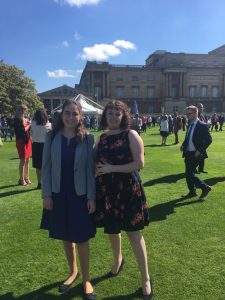