At funerals in Ancient Rome actors would be hired to wear the death masks of deceased family members to join the procession to the tomb. In this way the Roman family stressed their sense of connection to a long unbroken chain of ancestors. It was a powerful statement of where they came from and their identity. Indeed this connection to the past could even be mobilised to win public support and clients as Julius Caesar did by displaying the death mask of the populist Gaius Marius at the funeral of his aunt Julia. Being connected to one another through time really mattered in the Ancient world; I contend that it remains important today.

At Bennett we are concerned to develop young people with a strong sense that they are part of something which is bigger than themselves. We hope to help them become less preoccupied with their own individual identity and instead predisposed to look outward. Knowing that you are part of something and committing yourself to live your life in such a way that you see beyond your own individual desires and needs is a way of forming character. It also contributes to extroversion and good mental health.

Over the last academic year and into this we have sought to revivify and re-present the school’s vertical Guild system. This is not out of a desire to ape J K Rowling’s Hogwarts but rather because we think our Guilds provide an opportunity to develop shared identity and healthy competition.

The Bennett Guilds are named after past bishops of Rochester: Audley, Chavasse, Fisher, Gundulf, Justus, Langdon, Merton and Ridley were the canon that I inherited on becoming headteacher here. The expansion of the school has given me the opportunity to add to that list, first by adding Edward Talbot, a 19th Century pioneer of women’s education, and now by adding John Warner, the Restoration Bishop of Rochester. In doing so I have been very conscious of the opportunity to make new connections and links with these additions to our corporate identity.

We are delighted that the present Bishop of Chichester, the Right Reverend Dr Martin Warner will be joining us on the 30th September to celebrate the Eucharist and to inaugurate our new Guild Warner. I hope that his interest in doing so has been piqued by the shared name!

As far as I can tell, Bishop John Warner was no relation to our present Bishop of Chichester, but he was a remarkable and in many ways admirable person. He was a strong supporter of King Charles I who had defended the king against the Puritans in Parliament by publishing a number of outspoken sermons on the matter of loyalty. He was made a personal chaplain to the King to protect him from a Puritan backlash and in 1637 he was chosen as the new Bishop of Rochester. He didn’t get to enjoy this appointment for long because as England slid towards Civil War he was first imprisoned in 1641 and then had his lands confiscated in 1643. Although he managed to be freed from prison, he had to flee to the Royalist leaning West Country and rely on the charity there of fellow supporters of the King.

With the execution of Charles I in 1649 Warner found himself on the losing side and deprived of his see of Rochester. Rather than ingratiate himself with the new regime, John Warner refused the oath of loyalty and so began 10 long years of exile under Cromwell’s Commonwealth. Only when John Warner was in his eighties, with the return of Charles II and the Restoration of the monarchy was the Bishop restored to his diocese where he continued in office to his death in 1666.

One happy connection that the school has been able to make in adopting John Warner as our new Guild Bishop is with the Bromley and Sheppard’s Colleges in central Bromley. Bromley College was founded as a consequence of John Warner’s will in which he made provision for housing “twenty poore widowes of orthodox and loyall clergymen.” The original building built to fulfil this commitment still exists and provides homes for retired clergy and their spouses. I took this year’s Bennett Head Girl and Head Boy to visit them and we had the privilege of joining the residents for Morning Prayer. Thereafter we had a guided tour of the colleges and the chance to see and photograph their portrait of John Warner. We hope to re-visit them soon, perhaps taking with us a school choir.

So the inauguration of our new Guild has provided us with the chance to make some new connections and to firmly stress the web of interrelationship which we find ourselves in, one which stretches both geographically and through time. I believe that an awareness of our interdependence and that we are part of a divine plan is a powerful countervailing force against the very many conflicts that we see dividing out society at present. It is perhaps fitting then to finish by quoting John Henry Newman, who is shortly to be canonised on 13th October this year. His words about our relationship with our maker and with one another as part of a created order resonate powerfully for me:  “God has created me to do Him some definite service. He has committed some work to me which He has not committed to another. I have my mission. I may never know it in this life, but I shall be told it in the next. I am a link in a chain, a bond of connection between persons.” 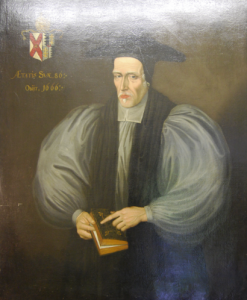